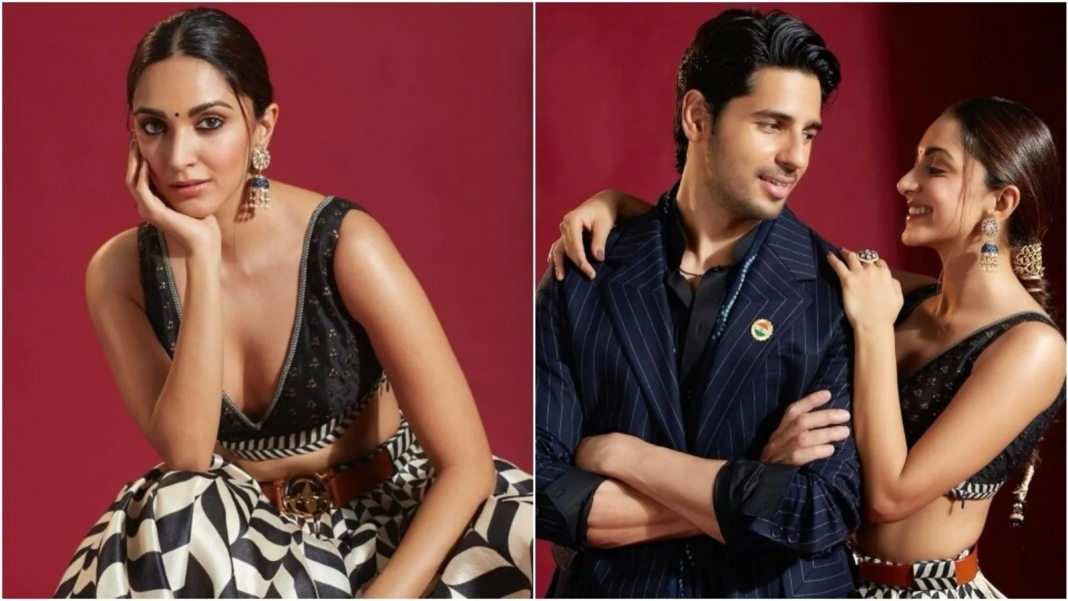 Actors Kiara Advani and Sidharth Malhotra, who are rumoured to be dating each other, were spotted at the Mumbai airport on Tuesday. The duo flew out of the city for a New Years’ vacation. Kiara Advani was the first to arrive at the airport and she cheerfully posed for the paparazzi too. The actress was soon joined by Sidharth Malhotra. The couple is rumoured to be heading to Maldives, where they will celebrate the New Year together.

Sidharth was seen sporting a green jacket with black pants, while Kiara was clad in a pink coat and hoodie. The two showed their passports to the security guard and then headed inside the airport, while waving at the photographers.

As soon as the video was posted on online their fans started flooding the comment section with hearts.. One person wrote, “They are so cute. The low-key yet so cute couple. Shershaah dekhne ke baad se toh yeh dono aur pyaare lagne lage hain (After watching Shershaah, I find them even cuter together). I hope they never break up.” Another fan wrote, “ab ye dono bhi gup chup shaadi karege (Now these two will have a hush-hush wedding).” While one said, “The Cutest on-screen and off-screen couple of Bollywood.”

The speculation about Sidharth Malhotra and Kiara Advani being more than ‘just friends’ was fuelled further during the promotions of their film Shershaah, which was a biopic on Param Vir Chakra awardee Captain Vikram Batra. Since the film’s release in August, Sidharth and Kiara have been receiving a lot of love from the audience. While some fans made sketches for them, many created Instagram Reels of their favourite scenes from the movie.

In an earlier interview with Bollywood Bubble, Sidharth addressed his equation with Kiara and what he likes about her. He also revealed the one thing he would like to ‘change’ about their equation: “What I like is that off-camera, her demeanour is unlike a film-actress, she has a sense of regular person to herself, which I appreciate and admire because I’m a regular off-camera, which is cool and easy. About change, it’s a very harsh word to use…I would not like to change anything, she’s a fabulous actor. Okay what I would change is…that she doesn’t have a love story with me.” Sidharth had responded to a fan who said that they wanted to see him and Kiara in a ‘hardcore’ romantic film. He said that ‘hopefully’ they would return with a love story. He also praised Kiara, saying that she brings in ‘a great amount of emotions’ .

Speaking about their equation, Kiara had earlier told in a statement, “As a co-star, Sidharth is extremely driven and focused. He loves to prep a lot and does a lot of readings. That’s very similar to the way I like to work on a film. So, in that sense, we got along very well. As a friend, I’d say he is one of my closest friends in the industry. I think, even as a friend, he’s full of life and always fun to be around.”

Kiara and Sidharth have not confirmed their relationship but continue to charm fans with their offscreen romance. Kiara is often snapped by the paparazzi arriving at Sidharth’s house. Recent buzz suggested that Sidharth Malhotra and Kiara Advani are all set to make their romance official next year. While the couple is not exactly planning a wedding, Sidharth and Kiara are keen to announce their love to fans.

On the workfront, both Kiara and Sidharth were seen together in Shershaah. The film turned out to be a success for both of them. Currently Sidharth Malhotra is busy with his action film Yodha, which stars Disha Patani and Raashii Khanna and Thank God with Ajay Devgn and Rakul Preet Singh. On the other hand, Kiara will be seen in Jugg Jug Jeeyo with Varun Dhawan, Neetu Kapoor and Anil Kapoor.  The actress is also acting opposite Ram Charan in director Shankar’s upcoming project.

Kendra Wilkinson is an American businesswoman, model, author, and TV personality with an estimated net worth of $6 million. She is well-known for her friendship...
Previous articleJean-Marc Vallée, ‘Dallas Buyers Club’ director dies at 58.
Next articleLiv Tyler Net Worth, Her Biography, Wiki, Lifestyle & More