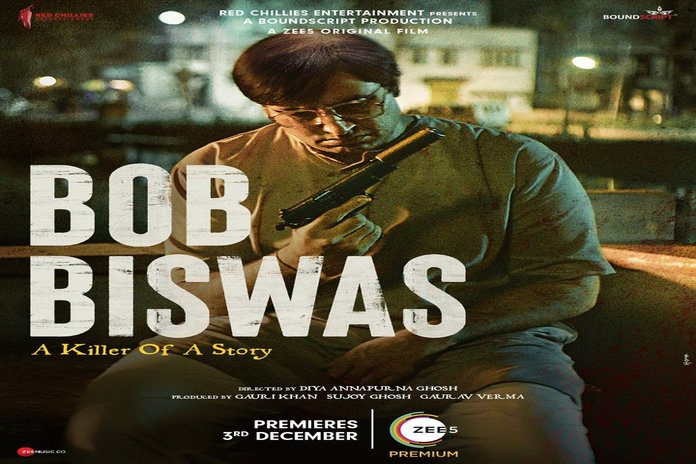 Director Sujoy Ghosh’s 2012 cult classic ‘Kahaani’ gave us a character who can send a chill down the spine even now. Bob Biswas played brilliantly by Saswata Chatterjee was a character that was mysterious, intimidating and had all the ingredients to be a perfect anti-hero leading a movie.

The announcement of a spinoff to ‘Kahaani’ with Abhishek Bacchan playing the cold blooded assassin Bob Biswas came with a lot of scepticism, though the trailer looked promising.

‘Bob Biswas’ written by Sujoy Ghosh and directed by his daughter, debutant Diya Annapurna Ghosh, is a film the focuses on the origin story of the iconic character. Set in Kolkata, Bob played by Abhishek Bacchan finds himself as having recovered from an eight year coma with no recollections of his life before the unfortunate accident. He is greeted by a wife and to kids and has to assume that this is life. How slowly he reconnects the dots to understand his real purpose, unearthing in the process his real character and a seedy business that is causing mayhem in the streets of Kolkata more or less forms the storyline of Bob Biswas.

As the film progresses, one soon realizes that its an attempt to humanize a deadly assassin. There is the prospect of a new beginning, presented in the form of Bob’s knockout wife Mary (Chitrangda Singh), her daughter Mini (Samara Tijori) from a previous marriage, and their son Benny (Ronith Arora). But Bob’s old handlers want him to continue the good work, especially since a drug called Blue is rippling through the city’s youth.

It gets personal when Mini becomes addicted to Blue. And it gets a bit more complicated when a local police officer Indira Verma (played by Tina Desai) starts investigating some of the deaths. Although he can’t remember a thing, Bob finds himself frighteningly adept with a gun. He has something of an existential crisis too.

A mysterious old pharmacist Kali Krishna Paul played by veteran Bengali actor Paran Bandopadhyay, who does a Saswata Chatterjee here by upstaging the principal actors) helps Bob ease back into the life that he left behind.

Abhishek must have all our sympathies since its an uphill battle for him to even come close to the demonic presence of Saswata Chatterjee. The whole “he has lost his memory” ploy therefore is probably to take some load off him so that Abhishek can worry less and play it the way he wants. This new Bob tries to accommodate into a readymade family surrounding with a strange obedience. All the effort notwithstanding, Abhishek Bachchan’s Bob Biswas never quite jumps out of the screen.

The film is essentially a dark-comedy thriller and it is enhanced by a very self-aware music album which is unique from what most Bollywood albums represent. The cinematography beautifully captures the metropolitan yet oldcity charm of Kolkata and its interesting to see how the dark humour of the film stays intact no matter how much out of hands things go in Bob’s life.

The plot is neatly tied, with some mind blowing performances; Bnadopadhyay’s is certainly one and Chitangda Singh undoubtedly another. She is captivating as a woman mystified by Bob’s mood swings. Bacchan is good, perhaps one of his finest performances, but oer can’t help but compare him with Chaterjee. Abhishek is no match for the vile that Kahaani’s Bob exuded with a smile that hid the devil. Diya by clothing her Bob with humanness robs the character’s core strength of being a ruthless murderer.

Diya Ghosh ably steers the 131-minute movie past the serial kills and Bob’s occasional hand-wringing, but cannot prevent the inevitable sagging.  If the purpose of the sequel is to tell us who Bob Biswas really is, and how this affable insurance agent evolves into a chilling creep, it remains un-answered.

Kendra Wilkinson is an American businesswoman, model, author, and TV personality with an estimated net worth of $6 million. She is well-known for her friendship...
Previous articleEllie Goulding Net Worth, Her Biography, Wiki, Lifestyle & More
Next articleVicky Kaushal clicked outside Katrina Kaif’s residence amid wedding rumours.